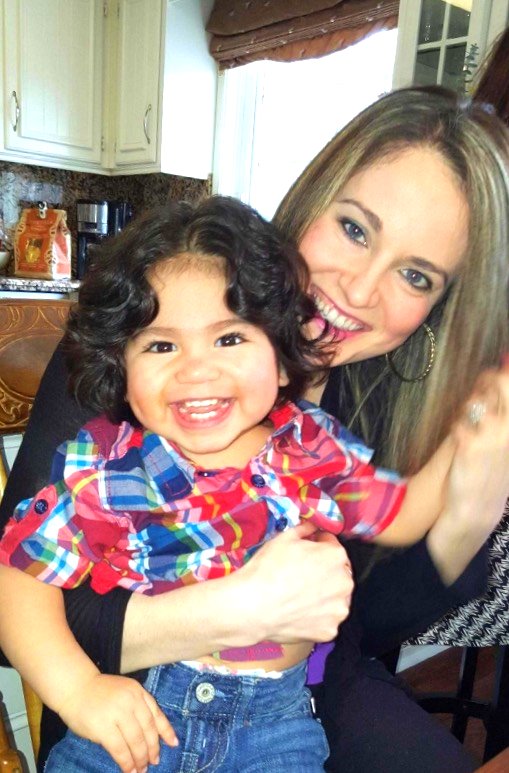 I knew I was pregnant. We BOTH knew..

It was after going for dinner at Brasas in Niagara Falls, and having to leave immediately after we were seated. The neauesa was out of control! Every single type of meat that was offered seemed like the most unappetizing thing I had ever seen. I kept trying to talk myself out of the overwhelming smells and the internal summersaults that had rapidly taken control of my tummy… But it was a no go. Nothing was stopping the inevitable.

My husband was a real trooper. He never even complained that all he had to eat from that $80 dinner was 3 bites of quinoa salad. Immediately he told me You’re pregnant! I was not quite so sure… I thought it’s probably just the flu…not wanting to get my hopes up. But in my mind all fingers and toes were crossed, and just a week later it was confirmed…Baby Cruz was on the way!!

We were crazy excited! It sunk in that we were going to be parents…I was going to be a mother, despite all the obstacles that were stacked in front of us sky high.

But that feeling of bliss quickly got squashed by a number of variables totally out of our control… The first one being no more meds. Nilch, Nada, NOTHING.

I never even knew what ‘rebound insomnia’ was until I went 7 nights (168 hrs) without even one MINUTE of sleep. No exaggeration…

This was by FAR the most difficult part of my whole entire MS Journey thus far. It was so bad that at times I felt like there was no way out of this…that I was NEVER going to sleep again… That I may not even make it out alive.

See the problem was that I was never advised I should be weaned off of a certain medication, one that apparently should only be given in small, short dosages…There’s no point now in mentioning any names…but someone DEFINITELY dropped the ball on that one.

As the sleepless nights went on, I was going absolutely NUTS…trying every bed in our house like the 3 bears, and when that didn’t work I tried sleeping in every bed at my parents house. My mom would spend most hours awake with me rubbing my legs, back and doing anything else that would give me even the slightest bit of relief. (Once a mother always a mother 😍)

All of this would be down right torturous for anyone without a chronic illness. But what ramped this up 5000 notches is that I DO have a chronic illness, and even losing a few hours of sleep is absolutely disastorous for an MS patient.

There are no words to describe the level of pain my body was in and it got worse every minute more without sleep.

My body on a good day feels like it’s 500 pounds, but after 7 nights of no sleep, there were parts of me that were literally paralyzed.

No combination of words will ever be able to describe how down right BRUTAL this experience was, and the impact it has left on me.

What was even more difficult was knowing I had pills right beside my bed which I knew would allow me to sleep…but they were SO bad for our baby. And knowing this fact, it didn’t matter how bad I got, or how many sleepless nights I had to endure, there was NO way I was taking one of those pills.

After only 4 weeks into my pregnancy I learned what it truly meant to make sacrifices as a mother. I TRULY got to know what “For the Love of a Child” REALLY meant.

Eventually I did start sleeping but in VERY small increments and I never exeeded 4 hrs a night for my entire pregnancy.

But what was I going to say? ‘I would love to ONLY have your back pain?’…of course not🤐… Because no matter how awful I felt, I also realized that what they were feeling felt awful to them too…and there was no level of explanation that would make them understand how my body felt… like a torture victim out of criminal minds episode.😱

No matter what I thought or how I felt I just smiled🙂..and agreed that the back pain was BRUTAL 😳

I would most definitely say that the SEVERE insomnia was by far the worst part of my pregnancy…But because of the insomnia and level of pain I had to endure, in addition to the god awful morning sickness, I ended up losing 25 pounds in my first 2 trimesters.

For a long long time, the only thing I could eat were crackers. In my third trimester I was able to force myself to eat enough that I gained 15 pounds back. But trust me…Landon never suffered and even when the doctors were concerned, I knew he was a healthy boy. I felt those powerful kicks and rock hard jabs!

After going for an ultra sound to erase any concerns, it was confirmed that he was measuring ahead of the game in both weight and size. My boy had his mamas back from before he was even born. 😘

Day by day, week by week, time passed slower than molasses, and at 35 weeks I told my OB that I needed this baby out of me ASAP. I needed to get back on treatment…I needed to SLEEP😴

The earliest he agreed to induce me was 38.5 weeks, and that happened to fall on New Year’s day. The other catch was that he was going to be on vacation, and I was therefore going to have to have a different OB for delivery…

But I was desperate…and none of these minor glitches stopped us from saying Lets do it! And just like that, I was scheduled at West Lincoln Memorial Hospital for Jan 1st, 2015.

I didn’t sleep much the night before (shocker!)…And I entered the day of with a multitude of emotions at an all time high. But No matter how horrible I felt physically, I couldn’t help but feel an overwhelming sense of excitement. In just a matter of hours, all we had overcome, endured, and battled would all be worth it.

The crazy part is I never even had to be induced, as I ended up going into labour naturally just hours after I arrived at the hospital.

It was a long and intense labour. 18 hours and 43 minutes to be exact…I opted out of an epidural or any other type of pain medication. My plan all along was to have a natural labour and that is what I did.

For the last 4 hours of my labour the contractions were less than 30 seconds apart and never did I EVER imagine how painful they would be.

But after 38.5 weeks of torturous mayhem, I knew at this point it was TRULY down to mind over matter. Regardless of the intensity…I reminded myself that this type of pain was only temporary. The comfort of knowing I had already gotten through 💯 percent of my toughest days, allowed me to “push” past the finishline. (No pun intended 😉)

On Jan 2nd at 4:43 am, weighing in at 7lbs even, Baby Landon Fernando Cruz was FINALLY here. And although I was in awe and utter amazement of the most adorable little being that lay on my chest, my very first words were “Thank God it’s over!”

And while we found ourselves wrapping up our toughest chapter of adversity yet, the biggest one of our lives was only beginning!